Ontario College Installs Acoustiblok – ONTARIO, CANADA. In response to complaints that noise from the school cafeteria and loud plumbing rendered two classrooms unusable to students and teachers, Fleming College in Peterborough, Ontario has installed Acoustiblok® noise deadening material in two classrooms to reduce noise leaking from a busy cafeteria below.

Fleming College Facilities Manager Mike Peart decided to install Acoustiblok’s 3mm noise abatement material after researching sound deadening products to find an affordable option that worked. Peart said that the cafeteria noise was infiltrating the classroom above it through the wall cavity and a series of exhaust vents that acted as a conduit for noise between the floors. This type of noise problem is not uncommon in schools and other public and commercial buildings that were designed and built without acoustical principles in mind.

The noise permeating the classroom created a serious distraction for students and teachers, and eventually the classroom had to be abandoned until the problem could be resolved. Fleming College hired Beavermead Construction of Peterborough to install Acoustiblok on the walls and in the drop ceiling of the first classroom, resulting in a 12 decibel sound decrease.

“The room measured at 58 dBs before we installed Acoustiblok, and it measured at 46 dBs as soon as the installation was complete,” Peart said. “We are really impressed with it, it did exactly what we were told it would do.” 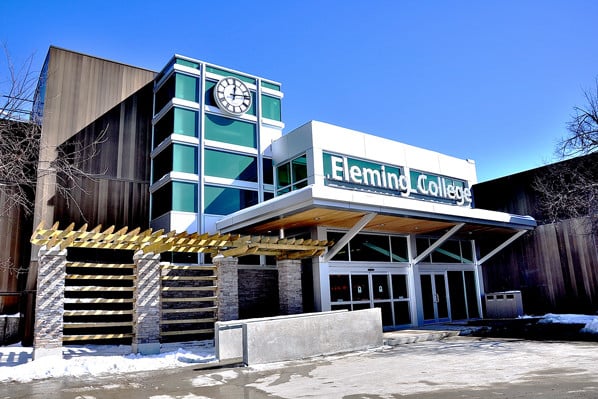 John Kraetzer of Beavermead Construction said the product went in easily, and made such an impact on the noise problem that his company decided to purchase it for another Peterborough project he was working on, a government building that required soundproofing between government building offices and a prayer center that shared a common wall.

“They told us to use a product called Green Glue, but we had already installed the Acoustiblok at Fleming College, and I knew how well it worked there, so I decided to use it on this project as well,” Kraetzer said. “They were thrilled with the results too.”

After the first installation, Peart said he had Acoustiblok installed in a second classroom plagued with noise problems coming from plumbing pipes within the wall, with the same excellent results they had in the first classroom. “We’re really happy with the Acoustiblok treatments,” Peart said.

Acoustiblok Founder and President Lahnie Johnson says that the Acoustiblok noise abatement material is the perfect solution to classroom noise, particularly in academic buildings designed before architects began taking acoustics into account in their designs. “The hollow walls and multiple vents between the cafeteria below and the classroom couldn’t have been more effective in creating a noise chamber,” Johnson said. “This type of design flaw is not uncommon in late 20th century public building design architecture, and many schools are now being forced to address the issue when classrooms become too noisy to be useful.

“We are finding that more and more academic institutions – from elementary schools to universities – are struggling with noise problems that are easily remedied with Acoustiblok.”