An Explanation of the Nature of Sound

Hearing Sound Explained – A sound wave (waves that carry sound), like any other wave, is introduced into a medium (like air or water) by a vibrating object. Sound can’t travel through a vacuum (an area empty of matter). The vibrating object is the source of the disturbance that moves through the medium. The vibrating object that creates the disturbance could be a residential or commercial generator or HVAC unit, a stereo speaker, a person talking, or other things. Regardless of what the object is, the particles of the medium through which the sound moves is vibrating in a back and forth motion at a given frequency. Three characteristics are used to describe a sound wave. These are wavelength, frequency and amplitude.

–  Frequency: This is the number of waves that pass appoint in each sound.

–  Amplitude: This is the measure of the amount of energy in a sound wave.

Humans can hear sounds at frequencies from about 20 Hz to 20,000 Hz, though we hear sounds best from 1,000 Hz to 5,000 Hz, where human speech is centered. Hearing loss may reduce the range of frequencies a person can hear. It is common for people to lose their ability to hear higher frequencies as they get older.

Sounds at some frequencies are perceived as louder to the human ear than sounds at certain other frequencies, even though they may actually have the same dB level.

How we hear sound

This demonstrates two interesting facts about how we hear:

1. The lower the frequency, the less sensitive the human ear is to it, especially sounds below 100 Hz.

2. The human ear is most sensitive to sounds around 4000 Hz.

How we measure sound levels 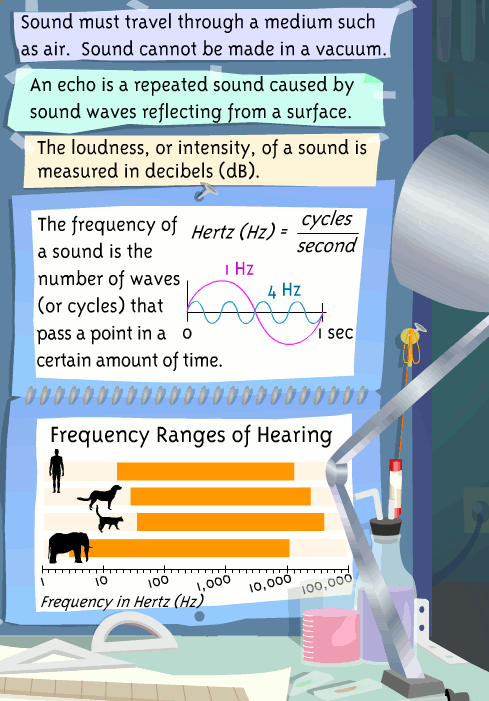