Improving acoustics with office soundproofing pays for itself by the increase in your company’s productivity. Although some people think that they function efficiently in a noisy and hectic environment, research shows that decibel levels over 60 can reduce a person’s attention span. This can become a problem in an office environment where productivity is the order of the day and has a direct impact on the company’s bottom line.

Noise in the workplace can increase tension and stress and lower productivity for workers who are exposed to low to moderate levels throughout the day, according to a 2001 Cornell University study published in the Journal of Applied Psychology. A normal conversation takes place at about 60 decibels and usual office background noise ranges from approximately 45-55 decibels. When workers are placed close together in open rooms or in rooms with many people talking at the same time, decibel levels can rise to 70 decibels and higher. Decibel is a term used to measure sound. Every 10 decibel increase of sound is perceived to be twice as loud to the human ear. Exposure to sounds of 85 decibels or higher over a prolonged period can cause hearing damage. For this reason, workplace noise is regulated by most countries.

Office work is a mental activity that requires concentration and focus. Complex tasks such as programming, engineering, writing, analysis, and design work often involve the psychological state of flow. This is a fragile state of concentration that can take fifteen minutes or more to engage and is easily broken by distractions such as irrelevant speech or someone interrupting unexpectedly. 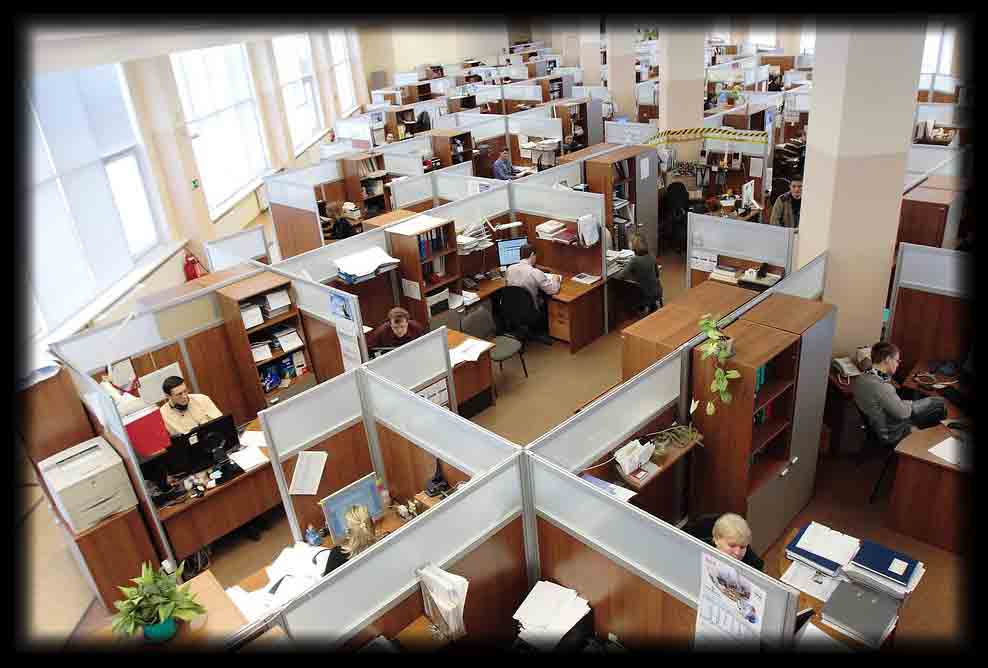 If you work in a cubicle-based office, these findings may or may not surprise you:

Originally designed to save space and foster communication between co-workers and management, the open-plan office has backfired for many, providing too much communication and too little privacy. With so many offices having adopted cubicle layouts worldwide, many staffers are finding ways to escape their noisy co-workers: headphones, barricades consisting of file cabinets and piles of folders, books and even boxes.

Social scientists have been studying the cubicle’s contribution to productivity – or lack thereof – and are discovering more than they had bargained for. Researchers at the University of California, Berkley surveyed more than 65,000 workers in North America, Australia, Africa and Europe who work in cubicle-style offices, and found that more than half complain of lack of “speech privacy” – which is the number one complaint among office workers everywhere.

There is a whole cubicle culture that has festered in workplaces for decades, making workers miserable, unable to focus, and not as productive as they could be due to the constant noisy distractions and interruptions. Companies are finally beginning to pay attention to the noise problem and its affect on the bottom line. Offices are being redesigned, sound abatement material is being installed in cubicles, interior office designers are incorporating soundproofing material in new cubicle wall designs, and acoustical engineers are being called upon to help right the wrongs.

“Sound masking” has become a particular focus for some managers, determined to address volume issues without losing the cubicle setups altogether.

An evolving technology etiquette is becoming the norm in many cubicle-style offices as well, and staff are wearing headphones to block out noise and distractions. Headphones are the new wall, according to one Manhattan office worker.

John Goins, who lead the survey team underwritten by Berkley’s Center for the Build Environment, says that with few exceptions – those being the workers who are the noisemakers – most office workers are unhappy with cubicle life.

“Noise is the most serious problem in the open-plan office, and speech is the most disturbing type of sound because it is directly understood in the brain’s working memory,” said Berkley Acoustician Valtteri Hongisto, who discovered that workers are more satisfied and perform better at cognitive tasks when speech sounds were masked by a background noise of a gently burbling brook.
Many studies show that conversations are shorter and less detailed in open offices because the discomfort level of having their phone conversations overheard has many workers unwilling or unable to bring themselves to have meaningful dialogues over the phone.
Trying to address privacy needs among office workers while maintaining the open concept for collaboration has become a cottage industry in itself. In 2009, software company Autodesk moved into a an open-plan building in Waltham, Massachusetts and installed what is known as a “pink-noise” system, which gives off  a soft “whooshing” sound over a speaker system that mimics the sound a ventilation system makes. However, Autodesk’s system is specially formulated to match the frequencies of human voices, as this is how a dedicated sound masking systems works.
Still, despite the complaints worldwide about the open-plan and cubicle office designs, there are no plans to eliminate either because they are inexpensive and because the open floor design promotes communication. Certain workplaces, such as newsrooms and trading floors, depend on the open floor concept because informal collaboration is a critical element in these environments.

Finally, researchers at Finland’s Institute of Occupational Health have been studying the distance conversations carry in an open design office, and then analyzed the effect on those office workers who unwillingly overheard the conversations simply due to proximity. Their findings show a decline of five- to 10-percent in cognitive task performance that required short term memory efficiency (reading, writing, and other forms of creative work) among the unwilling listeners subjected to the conversations.