Paul Henry and his wife Jeanette tore their house apart trying to locate a bothersome noise.

One morning about a month ago, I woke up with a throbbing headache – it was throbbing in a rhythmic way, to the beat of some sound; it took me a minute to wake up enough to figure it out. It was throbbing to the beat of a relentless “beep…beep…beep-ing” noise, and I realized pretty quickly it had to be a dying battery in my smoke alarm, way up there on the ceiling. I knew this because it happened once in my last house which had 17 foot ceilings, and I had to wait hours for a handyman with a huge ladder to come and fix it. It was awful.

So that morning last month I took two aspirin and waited for some pain relief, which came, but the beeping noise was agitating. I have no ladder – I need to get a ladder – just a step stool, and I could just barely reach the thing. By now the noise had really gotten to me, so I just tore the unit out of the ceiling and ripped the failing battery out of it. It hung there like the carcass of a battered piñata.

You know what? It kept beeping.

I could not find another battery anywhere in the house, and I am a battery hoarder. I need to have a battery available to me at any hour of the day or night; you know how it is, when you need a battery. So I always make sure I have a stockpile. But I moved a few months ago, and there are still some boxes…anyway, I tore the house apart and could not find my battery stash. 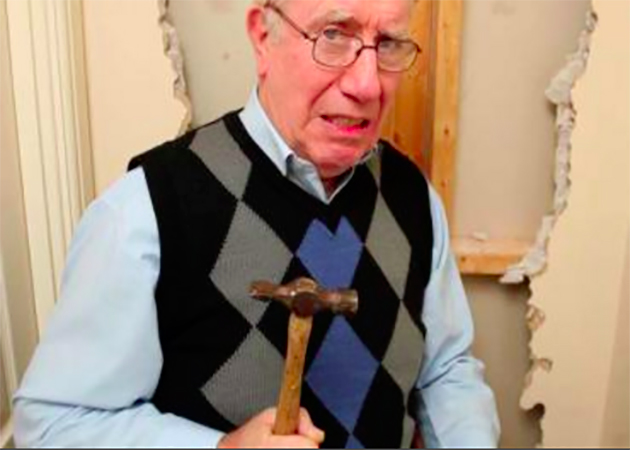 About an hour had passed since I woke up with my head dancing to the beep beat. My noise-induced high blood pressure by now was through the roof. I had already grown to hate the beep. I despised it, I wanted it dead. I was having crazy person thoughts over this beep after just an hour of its relentless taunting. I threw on jeans and a t-shirt and got out of there. I had to get away from it. I went to Walgreens and bought a new battery, and then I slummed around town for a few hours. I needed to get home, I had a ton of work to do, but I just couldn’t go back there. Not yet. I was chastising myself for not knowing where my battery stash was, and in fact I would unpack those last 10 boxes that night. I swore to myself, never again.

OK, I’m going somewhere with this. Bear with me.

How many of us have, at least once in our lives, told someone we “tore the house apart” looking for something – missing car keys, reading glasses, or the single roll of Scotch tape that we keep for gift wrapping but we can never find when it comes time to wrap a gift? When we say we tore the house apart, we don’t mean it literally. Maybe we emptied a few drawers and dumped the contents of the kitchen garbage can onto the floor to find something, but we don’t literally tear the house apart.

OK, so did you ever say you tore the house apart looking for a noise? The source of a noise, that is? A mystery sound that is keeping you awake nights and driving you crazy during waking hours?

Paul and Jeanette Henry were in just such a predicament when a mystery sound – some low level beeping sound – drove the retired couple to, as they said themselves, the “edge of sanity.” Their words.

And low frequency noises have been found to drive people to that bad place. In fact, studies completed just this past summer have found that certain sounds that aren’t particularly loud fall within a range of megahertz – a unit of sound that measures wave frequencies, like in radio waves – that is incompatible with happiness and general well-being. There’s just something about these low level sound waves that wreak havoc on the brain via the human ear, and this was the kind of noise that Paul and Jeanette Henry were experiencing.

They called in electricians and builders and asked them to locate the source of the sound and put a lid on it, to no avail. Next, Paul and Jeanette took crowbars to their walls and tore out whole sections of drywall, tore up floorboards, ripped gaping holes in their ceilings because the noise was just driving them that nuts.

And yet the menacing beep continued to taunt them, probably something like the Raven in the Edgar Allen Poe masterpiece, which if you’ll recall ended badly.

For more than a year, Paul and Jeanette Henry were harassed by this low level beep that could not be found. They were becoming seriously sick with noise-induced stress, sapped of all energy from noise-induced sleeplessness, and from the look of Mr. Henry’s photo in the local newspaper, shedding some major tears in frustration. These two are in their late 60’s, retired, and living with a monster that wouldn’t leave them alone. It’s heart wrenching to think that this nice retired couple had to go through such misery, and that their house has holes in the walls, floors and ceilings all over the place – you can almost picture their manic frustration as they took crowbar and hammer to every solid surface, only to be left with a mess – and a relentless beep…beep…beep.

I had a lump in my throat just reading about their plight, the memory of my own beeping apocalypse still relatively fresh in my mind. Why couldn’t anyone help these poor people? It seems crazy that electricians and builders couldn’t locate the noise source!

Nothing and no one could help them.

They meticulously took apart every one of their grandchildren’s toys in the hopes of discovering a short circuit in a talking Muppet. No luck.

A year of this insanity drove them to the brink. Noise can do that. It makes the blood pressure rise, it exacerbates stress and depression, it can lead to heart attacks and strokes, and the resulting insomnia makes all these conditions even worse. It makes people knock huge holes in their walls, floors and ceilings – people who ordinarily would never do such a rash and destructive thing.

It makes people flee their homes, leaving their smoke alarm hanging from the ceiling like a beaten piñata.

Mr. Henry said that when they first noticed the noise, it wasn’t consistent; it just went off every now and then, so they lived with it.

Eventually, it was a 24/7 menace, beeping every 30 seconds for the better part of a full year.

The Henrys were at their wits end.

One night, Mr. Henry decided to turn off all the lights in the house and follow the sound in the dark, letting his ears guide him. The relentless beep…beep…beep led him through the house, in the dark, like a bloodhound only without needing to smell anything. The sound led Mr. Henry to an old chest of drawers; when he opened the drawer, the beep got louder.

There it was – a 10-year-old smoke alarm unit with a dying battery that someone had shoved in the back of the drawer, probably about a year earlier.

You know the relief they felt – after 12 long months of tearing the house apart to get to the noise source, they had it. Now they were suddenly faced with the realization that it was actually something so simple, and they probably had some burning sense of horror over the condition of their post-beep home. Like waking up out of a nightmare and realizing you put the cat in the dryer and you can’t even believe you did that! And you can’t take it back.

But mostly they were relieved. Mrs. Henry says they were amazed, and really relieved.

Noise is a powerful thing. The couple lived with that relentless beeping for so long, the memory of it still torments them. That beep is embedded in their brains.

“We still keep thinking we can hear it,” says Mrs. Henry.

I am relieved to say, the sound of my smoke alarm’s beep does not linger in my mind. And although I did manage to shut it up by getting a new battery in it, I was unable to get the unit back in position in the ceiling. I can’t reach, so I have to wait until one of my sons comes to visit me, and both of them live far away, so it could be a while. So I am haunted by my battered piñata of a smoke alarm, still hanging from the ceiling. But at least it’s not beeping.